CURO Financial Technologies (CURO) is a financial services company focused on providing financing to subprime borrowers both in-store and online, with operations centered in the United States and Canada. As a result of COVID-19 and the subsequent economic disruptions, the stock has fallen quite a bit from its February highs.

However, loan losses haven’t moved much, as government stimulus helped insulate this consumer base from losses. It is still uncertain if a second round of stimulus is forthcoming. However, given recent guidance from the US government, it seems more likely than not that we will get a second round of stimulus. This will further reduce the credit risk in the portfolio even if the downturn continues.

To be upfront, this is not a historically popular name, with high short interest driven largely by increasing regulatory pressures capping interest rates in states such as California (AB 539).

And although the near-term credit risk to the company’s portfolio should be relatively muted, this increasingly onerous regulatory environment is what is ultimately leading me to be neutral on this name.

Public perception of the payday loan industry has always been negative. However, it is only relatively recently that increasing uneconomical rate caps have started passing state and provincial legislatures. As an example, rate caps on installment loans are now capped to 36% in California.

Furthermore, if the Democrats win the next election and grow their share in the legislature, I believe it will be incrementally negative for CURO Financial, as they will likely empower the CFPB to set rate caps nationwide. Given that rate caps, if applicable, are still largely set on a state-by-state basis, this can be a material headwind to the business if a nationwide rate cap is set in place.

In the Canadian market, it is a similar scenario, with rate caps being put in place in across a variety of different provinces, including BC, Ontario, and Alberta. This has led to CURO Financial pulling out of certain markets. I expect continued rate pressures, and given that it strikes at the core of the economic viability of CURO Financial’s model, I believe it is best to stay on the sidelines.

Looking at the most recent Q2 financials, the company’s revenues and margins both declined as new originations and credit quality took a hit. However, despite the macro weakness, CURO Financial still generated positive EPS, which speaks to both the operating leverage inherent in the business as well as the significant positive impact that government stimulus has had on the company’s borrower base. 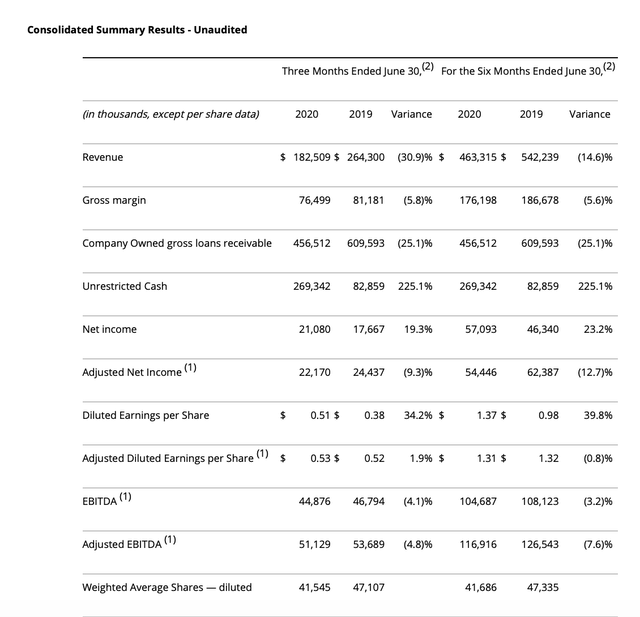 Overall volume trends and originations are continuing to improve as end-market demand picks up again after the Q1/mid-Q2 lull. This will hopefully drive a narrowing on the YoY revenue decline in Q3. The company has strong liquidity and balance sheet, which will allow it to take advantage of a resurgence in demand. Thus, there is a near-term positive catalyst here. However, given the regulatory environment, I am still long-term negative on the stock.

From a valuation perspective, CURO Financial is trading at relative trough levels at close to 3x P/E. Given the overall volume pick-up we are seeing as we head through the 2H, there is a case to be made of a near-term re-rate in this period. However, this is overshadowed by continuing regulatory pressure in the space that is driving uneconomical margins in many municipalities. I expect this to continue, and it is the core reason why I am long-term negative on this company and this space. This is what drives my bearish rating on the stock.

Disclosure: I/we have no positions in any stocks mentioned, and no plans to initiate any positions within the next 72 hours. I wrote this article myself, and it expresses my own opinions. I am not receiving compensation for it (other than from Seeking Alpha). I have no business relationship with any company whose stock is mentioned in this article.